At long last, we are happy to share these results from the 2019 SuperCollider survey! In total, we had 253 responses from friends of the SuperCollider project around the world. We’re incredibly thankful to everyone who gave their time and energy to respond so thoughtfully; these results will be invaluable in guiding future development work and in informing community discussion. Based on the enthusiasm we’ve seen, we certainly hope to do this again next year!

Here are a few of the top takeaways from this year’s results:

Below, we present aggregated data for each survey question. In the next few weeks you might see more posts from some of the developers sharing their thoughts on the survey. We’re very excited to see what the community thinks of these results!

The individuals primarily responsible for creating the survey and reviewing the responses were Nathan Ho, Brian Heim, Patrick Dupuis, and Josh Parmenter, with help from several other developers in crafting the questions and wording.

At the end of this post, you’ll find the data in these charts presented as text tables for easy access.

Note: Quarks with fewer than five mentions are not included in this list.

These responses were difficult to categorize; answers that had fewer than four mentions are not included here. Hopefully, this chart gives a good sense of the broad range of uses people have found for SuperCollider.

This list is the top twenty most frequent answers we received; in total there were over 180 unique tools mentioned in response to this question!

These are the top ten most frequent answers we received.

Responses with fewer than four answers are not included here.

Question 13: How would you describe your experience learning SuperCollider?

This question was very personal, and the responses were difficult to place in any sort of categorization. We have decided to keep them private, but future posts from the development team may reflect on them.

Question 14: How has your experience been interacting with the SuperCollider community?

The responses to this question were difficult to categorize. We hope you find this word cloud informative, or at least amusing. 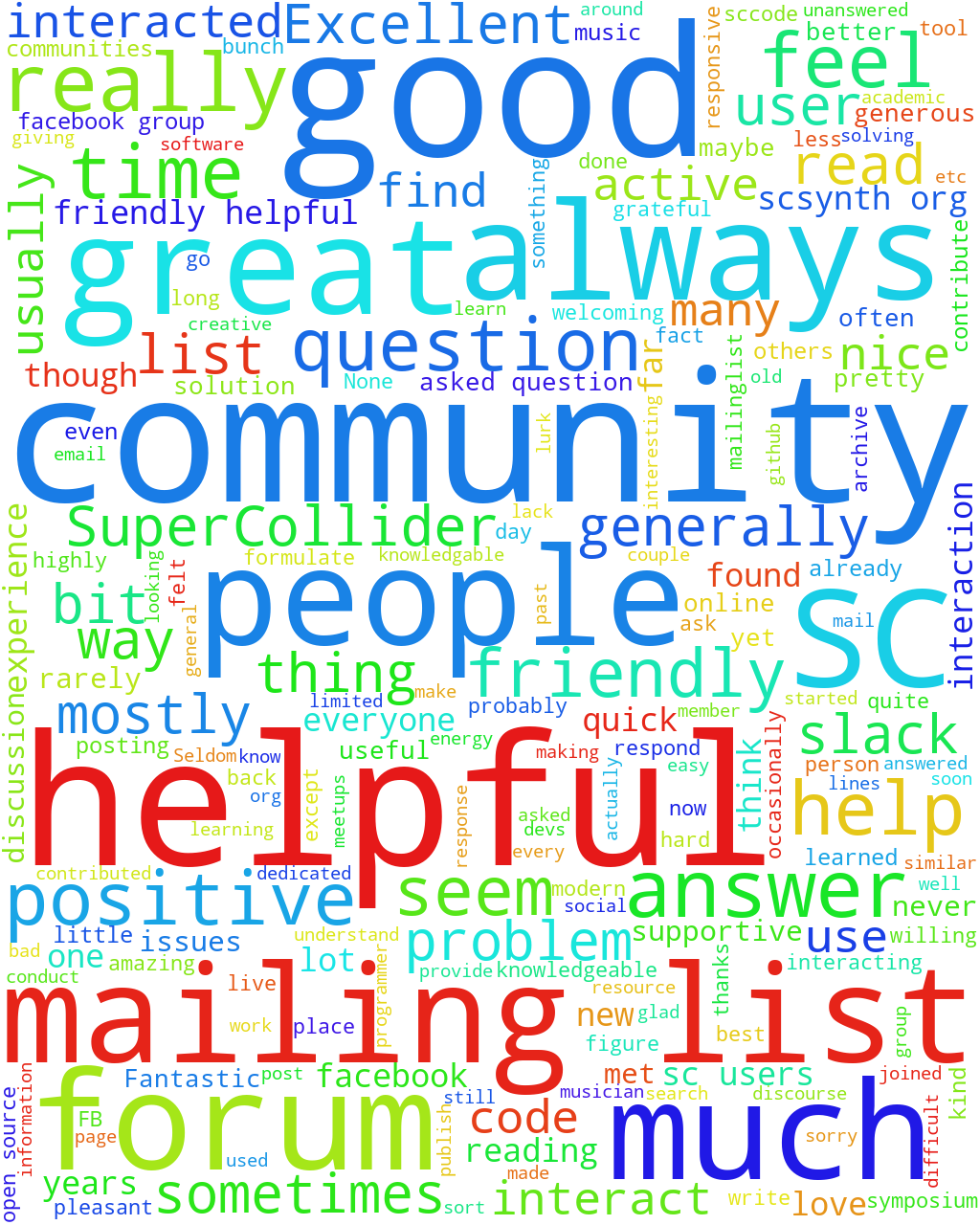 The methodology for calculating these scores was:

Question 42: Suggestion box: Any features you want to see?

We received a great variety of answers to this question, and it would be too difficult to try to boil them down to some aggregated format. Some of the more popular ones were:

1. How long have you used SuperCollider?

2. Which best describes your level of proficiency?

3. As a user, I think of SuperCollider as…

4. What are the platforms on which you use SuperCollider?

5. What version(s) of SuperCollider do you currently use?

8. Have you heard of supernova?

9. What do you use SuperCollider for?

11. What are the biggest pain points you have encountered while using SuperCollider?

12. What resources have been useful to you in learning SuperCollider?

13. How would you describe your experience learning SuperCollider?

14. How has your experience been interacting with the SuperCollider community?

15. Where do you discuss SuperCollider?

See note on methodology above.

43. Where you would like to see the most development effort go in the future?

45. How do you identify your gender?